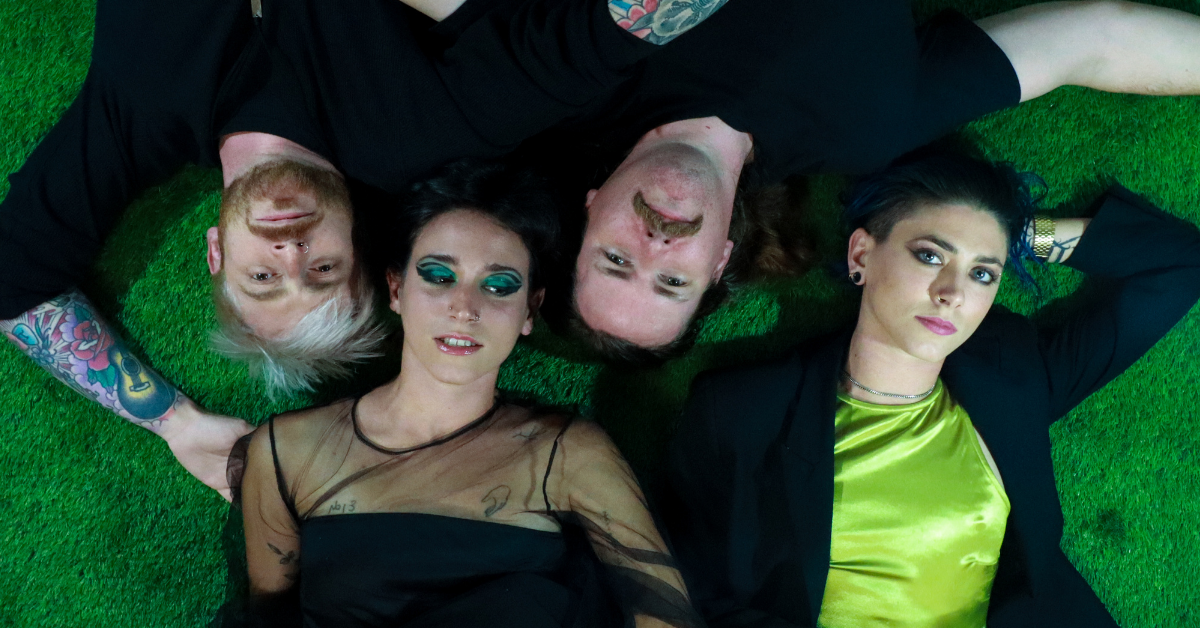 Sandman Sleeps will be releasing their debut album, Crisis Actor, on March 26. The band has unveiled two singles so far, “Portrait of Jennie” and “Fellini.” When they were teens, sisters Cristina Peck, on vocals and guitar, and Alex Peck, on bass, formed Sandman Sleeps. Later, drummer Karsten Andersen and guitarist Zack Jones joined them in early 2020.

A decade in the making, Crisis Actor is an album inspired by classic cinema. Specifically, Cristina drew inspiration for “Portrait of Jennie” from William Dieterle’s 1948 movie of the same name. According to a press release, “Fellini” is “one part about personal experiences, but it’s also an ode to [Cristina and Alex]’s mom’s love of iconic film director Federico Fellini, whose monumental film La Dolce Vita (1960) was particularly an influence for this new single.”

Crisis Actor has a unique sound that takes listeners on a journey through many eras of music. We can hear tints of The Cranberries, Joy Division, and Björk. Still, Sandman Sleeps bring their own ideas to the table, and they sound like none of those acts. Their originality and pop-punk vibes capture the audience in an instant.

One of the most important instruments in Sandman Sleeps’ music is the bass. Songs like “Summer Rain” and “Rare Cloud” bring it to center stage, and the results are marvelous. Overall, the production in Crisis Actor is basically flawless; the entire album is a joyful journey. Even if some songs have sad lyrics, the upbeat essence of the record will take listeners to a feel-good state.

We talked to Sandman Sleeps about Crisis Actor, their upcoming music video, and their album release show. Read our interview below, and remember to follow the band on Instagram and Facebook. You can also pre-save Crisis Actor here.

How different do you think Crisis Actor would’ve sounded if you had released it 10 years ago?

Zack: For the most part, I feel it would have sounded pretty similar. Mine and Karsten’s taste hasn’t changed much since then, and the girls have been writing this album for 10 years. Karsten and I were in a dark place around that time, so, if anything, maybe we would have contributed darker parts to what was there.

Movies are of great inspiration for this album. If you had to pick only one film to watch for the rest of your lives, which one would it be?

Cristina: The Tiger and the Snow

You’ve mentioned Joy Division as one of your main inspirations, but who are other artists and bands that influence your work?

Karsten: Oingo Boingo and the Melvins.

What made you choose “Portrait of Jennie” and “Fellini” as the first singles?

Zack: I think “Portrait of Jennie” was the song that featured everything we brought to the album in terms of sound and dynamics. “Fellini” is just straight-up fun.

You’ll be releasing your first music video pretty soon. Can you give us any hint of what the concept will be?

Sandman Sleeps: It will be based on a scene from Federico Fellini’s film La Doce Vita. Crazy party vibes.

You have a show scheduled on the album’s release day — March 26 at Propaganda in Lake Worth, Florida. —. Will you be playing the whole album, or should the audience expect some surprises?

Zack: I think we’re gonna mix it up and throw in some new songs. Crisis Actor has really inspired us to feel each other, so we’re already excited for the next chapter.

What countries would you like to play music in?

Sandman Sleeps: We don’t think there’s a place we don’t want to play.

“Five Bell Alarm” has a very interesting production. How did this song come to life?

Zack: Alex and Cristina had a very specific vibe they wanted for this. It required a lot of tight percussion, and we added some extra things like shakers and bongos to bring that out. I mostly laid back and made some ambient sounds to back up what everyone else was doing so it didn’t sound too busy.

What’s each member’s favorite song on the album?

For Cristina and Alex, what’s the best part of getting to play music with your sister?

Alex: I love playing music with my sister. I think the best part is that since we are so close, intuitively we are often on the same page and don’t even need to verbalize what we are wanting when playing together. Our creativity flows easily together.

Crisis Actor mixes a lot of genres. What’s a genre that you’d never want to get into, if any?

Zack: I think we’re open to everything. We just want whatever we do to be different.

What do you expect the audience to take from Crisis Actor?

Zack: We’ve been asked this a lot. We think if they take anything at all, we did our job.