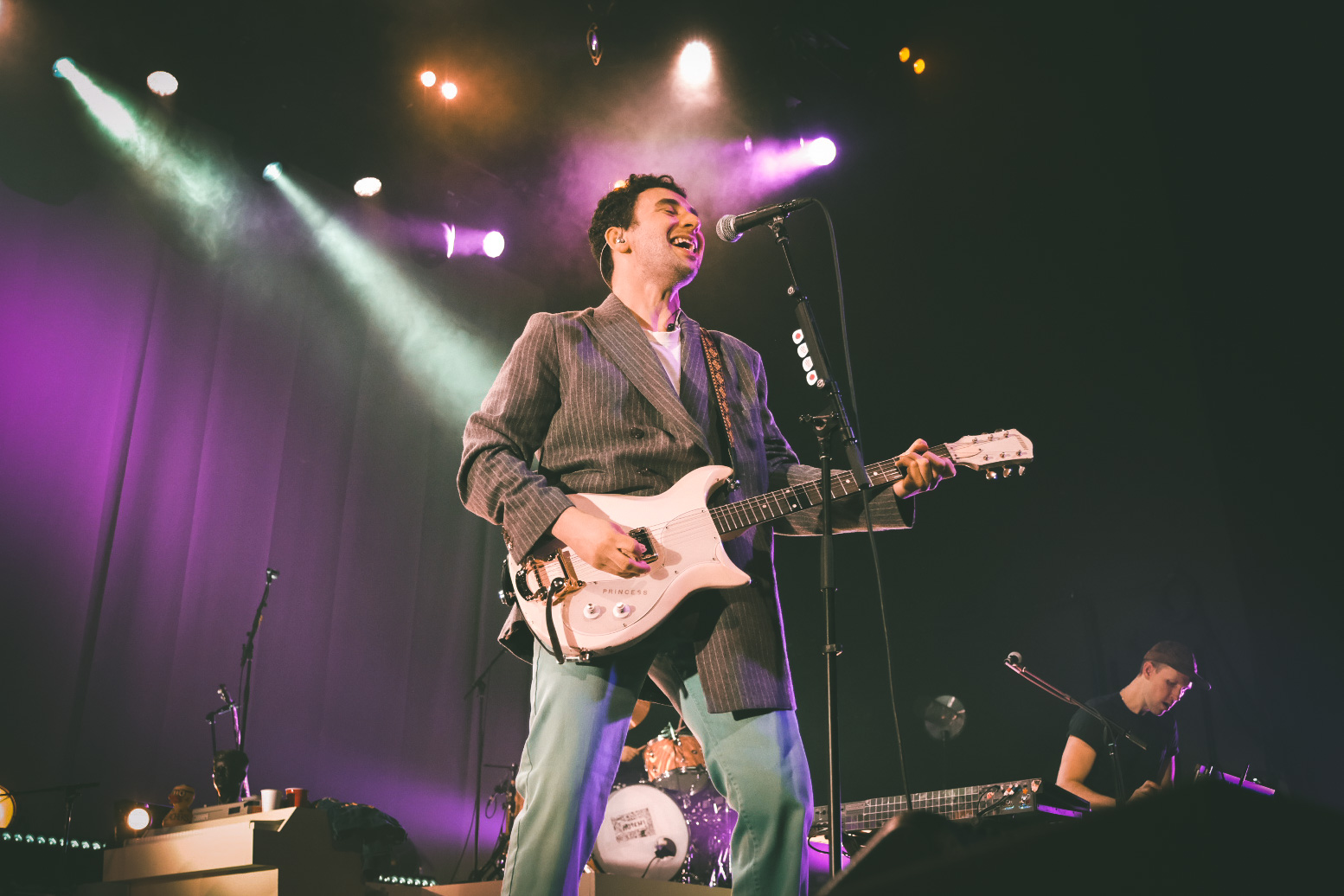 Albums are written in an order for a reason – they’re meant to be heard that way. Jack Antonoff reminded the crowd in front of him of that fact on Thursday night after he finished playing Bleachers’ debut album – 2014’s Strange Desire – in full. It was the first of two back-to-back sold out nights at the brand new Roadrunner in Boston where the band would play through their first two albums; with Friday being dedicated to 2017’s Gone Now.

There was no apparent rhyme or reason for the shows to happen when they did. Neither album has reached an anniversary that typically warrants a playthrough show – Strange Desire will turn 8, and Gone Now 5, this summer. Fan speculation that these shows would be used as a means of announcing the band’s 4th LP proved false, but in the end the logic isn’t what matters. In the world of Bleachers, if you build it, they will come.

As is usually the case for Shadow of the City – Bleachers’ yearly end-of-summer Asbury Park festival, on the final weekend in March, Boston served as the meeting point for Bleachers fans near and far. Coming from all corners of the country, and even internationally (signs from London, Honduras, and Argentina to name a few were present in the crowds), The venue was packed wall to wall both nights with fans ready to experience once in a lifetime shows sprinkled with a solid dose of nostalgia.

Since their inception in 2014, Bleachers’ fanbase has grown significantly in size – but the cult-like nature of their following has been there from the start. It’s a safe bet to assume that on any of their tours, there are multiple groups of fans following them from city to city, and if you walk past any venue that has their name on the marquee, you can be guaranteed to see a queue of fans waiting outside for the show from the early morning hours onward.

The Strange Desire show was the 50th time I found myself in a crowd watching the band play. I’ve seen them in more states than I could count on my two hands and I wouldn’t even know where to begin logging the miles I’ve traveled for their shows. And I am not even close to the only one with that story. Thursday night’s crowd featured a “this is my 40th show” sign and Friday night’s held a “45th show” sign – noting that the date was nearly exactly 8 years after their first New York show. For a band that has existed for less than a decade, the dedication of their fanbase is a testament to how special of a world they have built.

Of course, it’s the magnetism of the live show that catalyzed this world. These shows were no different, though they did take a form unlike any of their previous ones. Playing the albums in order meant that staples of Bleachers’ shows were altered. “Rollercoaster” – a song typically reserved for the latter half of the set, where Jack instructs the entire crowd to get on each other’s shoulders, was played second on Strange Desire night, too early on in the night for shoulder-sitting to make sense (though he did bring the song back in its regular fashion the second night). “I Wanna Get Better” – which was always the show’s closer during Strange Desire’s era (moving to the penultimate spot when Gone Now came along, and then the antepenultimate spot for 2021’s Take The Sadness Out Of Saturday Night tour) was played 4th, and omitted from Friday’s set entirely, which may be the only time Bleachers has played a show that didn’t involve the crowd screaming “Hey! I wanna get better!” back at the band.

Each album’s reprise track received its live debut, along with “Take Me Away” and “Goodbye” – and tracks that hadn’t been played live or full band in years made their triumphant return. After making it through each album, both nights held a medley of b-sides and songs off TTSOOSN. The band also debuted a new song – titled “Margo” – a rework of an unreleased deep cut previously called “Dance Rascal Dance” that was performed both nights.

More so than Strange Desire’s show, Gone Now’s night was chock full of nostalgic moments that took fans straight back to the first times they heard those songs played live. The set began with Jack dressed in his jewel-covered hat and jacket worn on the album cover performing “Dream of Mickey Mantle,” and he played the whole set with makeup-induced bruising on his face to mimic his look in the “Don’t Take The Money” music video. The band also brought out a cake and sang happy birthday to drummer Mike Riddleburger, a bit they carried out for the entirety of their 2017 tour, where each night was the drummer’s birthday, and each night the crowd ate the cake by the fistful.

It was evident throughout both shows how happy the band was to be playing these albums, and that joy was mutually felt by the audience. Perhaps the most emotional moment came towards the end of Gone Now – during the album’s closer “Foreign Girls” which ends with the repeated lyric “I loved you all.” The crowd held up a sea of colored hearts reading “We love you all” while cheers filled the silence as the band took a pause to take it all in.

The albums you love, the ones that you grow with, the ones that you let shape you, are the best albums in the world. It’s a simple fact. Their meanings can change shape and size with time, but the sounds of those notes and those words will always be special – coated in nostalgia, bringing you back to the place and person you were when you first fell in love with them. These albums brought me friendships and experiences I couldn’t imagine my life without. For myself and the thousands of others in the crowds last week, it was the most special thing to hear them played live, the way they were meant to be heard.

Strange Desire’s closer “Who I Want You to Love” ends with a repeated spoken line. In his performance of it, Jack stood at the microphone scanning the crowd side to side before closing his eyes and repeating “I wanna be grateful for the experiences I’ve had.”

Bleachers people – the band and the fans alike – certainly are.