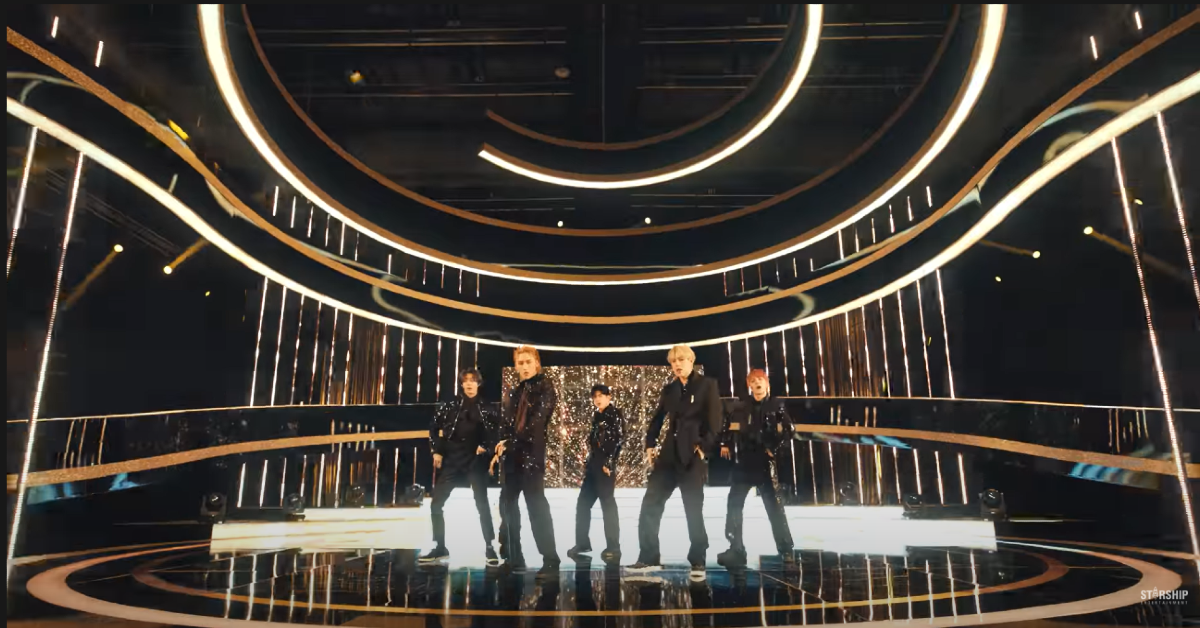 Since their debut, Monsta X have shown time and time again that they can embrace new sounds and styles while still remaining undeniably themselves. With the group’s latest release, the mini-album Shape of Love, not only does Monsta X reinforce this yet again, but they also elevate their sound to an even higher level.

Much like the album title implies, the songs on Shape of Love show off the multiple facets and curves that make up the feeling of being in love. The quintet kicks things off with a bang in the song “LOVE.” Driven by high-energy hip-hop vibes reminiscent of the 90s, while making sure to include the R&B vibes that the group has excelled in before, the track is an infectious work that is a fantastic opening to the record. In the post-chorus, member Joohoney confidently implores listeners to “sit back and enjoy the show,” which based on this track alone, listeners will definitely be enticed to hear what comes next.

“Burning Up” featuring R3HAB is the next track up, and the energy brought with “LOVE” is still cranked high. Backed by a sleek and futuristic EDM track, the members tap into a more sultry sound leading to the club-ready chorus. Following the vibe of the previous track, “Burning Up” sees the group still riding the highs of fiery love. “Breathe” is yet another sonic departure as Monsta X opts for a more funk and dance sound. Like many of the group’s other works, the performances of the members sound effortless, and even as a group, each member gets their moment to shine on their own. It’s a dynamic that Monsta X executes with great skill.

The next song “Wildfire” could be considered the transition of the album from the bombastic and suave sound of the first half to the more emotional and imagery-heavy second half. “Wildfire” with its clever songwriting showcasing the strong movement of the forces of nature, the track is a more moody endeavor, mixing hip-hop beats with a string arrangement. The layered vocals present throughout the track are a great stylistic approach, adding slight cloudiness as if smoke is rising.

“사랑한다 (Love You)” is the bright day that follows the darkness of the previous track. The love expressed in the previous songs has now reached a transcendent level with this stadium-ready and uplifting pop song. The vocals of the members change to match this new evolution perfectly, filled with sincerity and soaring. The track makes good use of slight tropical touches in the background to make it stand out from being a more generic pop song. A big part of what this album a solid release is touches like these, not lust in the tracks themselves, but in the adaptability of the members’ vocals.

The final track on the album “AND,” takes on a more introspective tone, as the group ends the album the same they started it: with a bang. “AND” is a plea for the love the group found to remember the times they shared together, while also looking forward to seeing what the future brings. Like “Love You,” this song is another anthemic delivery, though this one could bring listeners to tears. The closing line of the song, and thus of the album, is a heart wrencher as member I.M. sings “I sincerely pray that you don’t forget me.”

While that line sounds a bit somber, it’s a beautiful ending to an album that feels like some of Monsta X’s more vulnerable releases yet. The transition from the hot and heavy themes of the first few songs to the sentimental love ballads of the second is seamlessly done, leaving listeners wanting more. With songs like these, Monsta X won’t have to worry about listeners forgetting about them anytime soon.