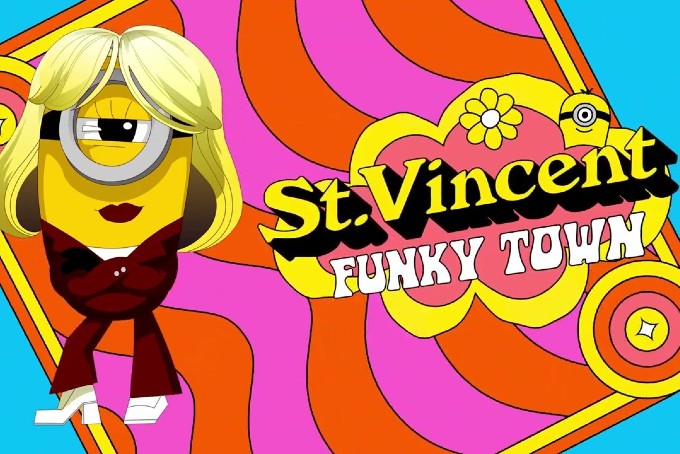 About to embark on her U.K. tour, St. Vincent’s (aka Annie Clark) dropped her newest cover— Lipps Inc.’s 1979 disco tune “Funkytown” for the upcoming Minions movie, Minions: The Rise of Gru. Her choice to reimagine the iconic hit makes sense as her most recent record, Daddy’s Home, had the pop artist diving into similar hazy, funk territory.

Clark worked on the track alongside producer Jack Antonoff— who helped produce both of her previous albums Daddy’s Home and Masseduction. Opening with cyber synths and western strings before falling into “Funkytown’s” familiar sound, the track features Clark’s distinct vocals curled inside a vocoder effect and a lively bassline. The short clip that accompanies the hit has a minion dressed up as Clark, complete with the blonde bobbed wig she wore on the cover of Daddy’s Home, dancing to the song in a 70’s-esque leisure suit with flares.

Besides St. Vincent, the movie’s soundtrack features a star-studded ensemble who cover an array of the 70’s grooviest and biggest hits of the decade, stamping names such as Brockhampton (“Hollywood Swinging”), Phoebe Bridgers (“Goodbye to Love”), H.E.R. (“Dance to the Music”), and Weyes Blood (“You’re No Good”), among others. The minions even cover Simon and Garfunkel’s “Cecilia” by themselves… which isn’t half bad.

Annie Clark took to Twitter during the release of her cover of “Funkytown” to write, “Excited to say the @Minions (including @jackantonoff) and I have just released our version of ‘Funkytown’ from #TheRiseofGru soundtrack. Shout out to Gru and them…” Included with the post was a graphic of St. Vincent as a minion.

Minions: The Rise of Gru and its soundtrack will be out on July 1st. You can listen to St. Vincent’s eclectic version of Lipps Inc.’s “Funkytown” on your favorite streaming platform now!