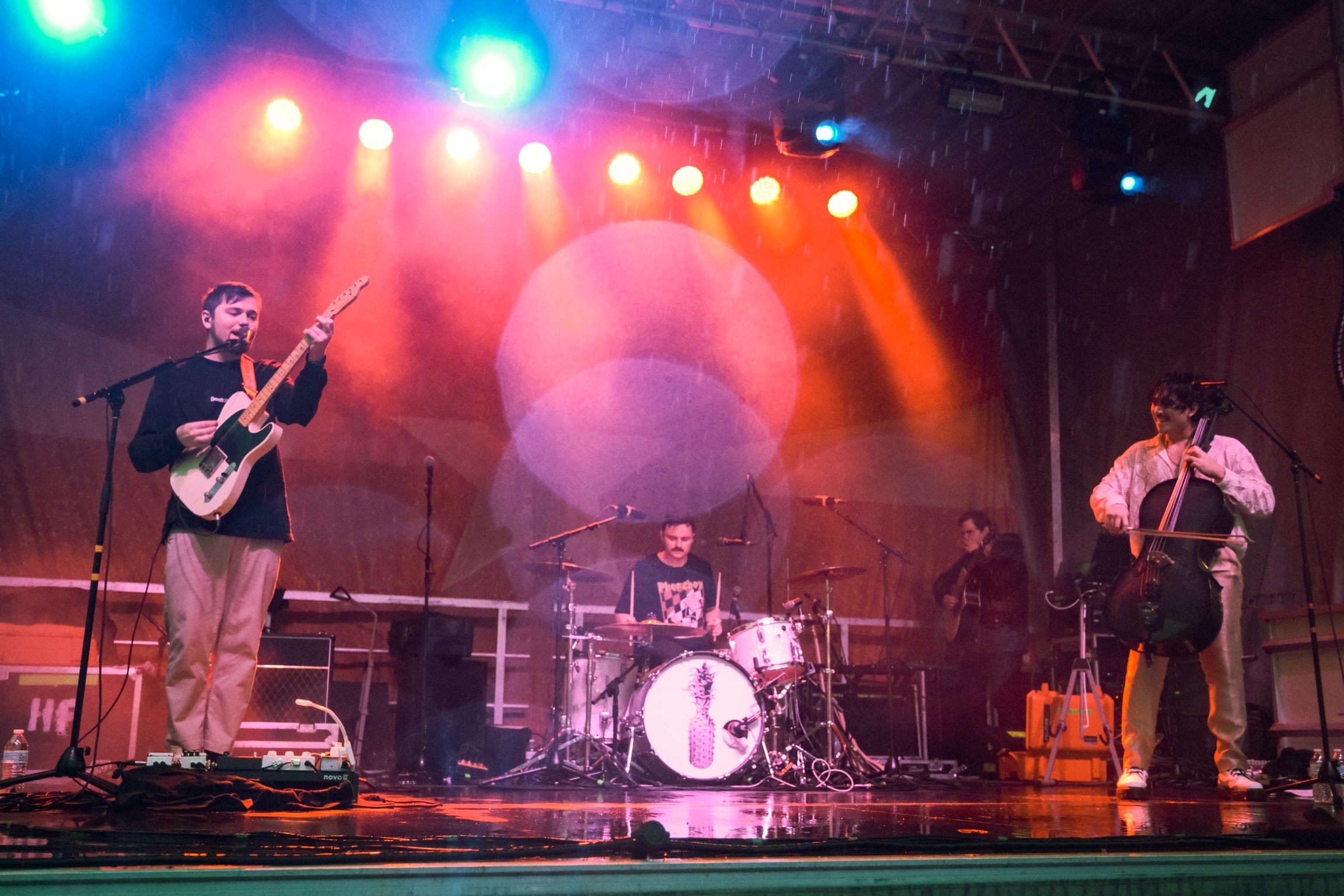 It’s easy to fall in love with The Happy Fits. Press play on any of their songs and you’ll find the intensely catchy choruses stuck in your head. Make your way to one of their shows and you won’t be able to stop yourself from dancing around. The New Jersey based indie-pop trio have a lot to say, and they seem to have effortlessly mastered exactly how to say it. 2022 was a big year for the band, and they’re showing no signs of slowing down.

Consisting of Calvin Langman on cello, Ross Monteith on guitar, and Luke Davis on drums (and all three on vocals), The Happy Fits first started writing music together in 2016. Beginning as a true DIY venture, the trio’s first shows were in their friends’ basements in college towns in New Jersey, and they booked all their tours themselves. “We would go on Bandcamp and stalk bands’ Facebook pages to see who else they were playing with, enter it all in a spreadsheet, and send out 200 emails at once. For every 100 emails we’d send, we’d get one yes,” Calvin explained on how they’d secure those early out-of-state gigs.

They quickly graduated from basements to more established venues in New Jersey like Asbury Park’s House of Independents and Asbury Lanes, and grew from Bandcamp-sourced tours to a slot opening for The Maine on this year’s The XOXO Tour, as well as a stint overseas. “That was a big upgrade for us, it was our first time we ever did House of Blues shows,” said Luke on touring with The Maine. “It was nerve-wracking playing in front of that many people, but it was awesome.” After a short break, the band headed over to Europe and the UK where they played Glasgow, Manchester, London, and Berlin.

In August, the band released their third studio album, Under The Shade of Green, via AWAL. The album is an upbeat, energetic collection of songs touching on the themes of finding one’s place in the world and grappling with the reality that we live in a world where we’re sometimes forced to feed into the systems that are destroying the planet. “For us, when we tour we have a big van and a trailer, and that burns a ton of gas. But that’s how we make our living,” says Calvin. “The album is definitely geared

towards Gen Z, and the younger generations that were kind of born into a shit show,”

The album’s cover art features a pineapple made of money on fire, symbolizing that money fuels what’s destroying the world right now. “The older generations that have fueled most of climate change, they’re gonna be the ones that are well off because they have the privilege and resources to stay safe from global warming,” explains Calvin. “Meanwhile, so many millions of people are being displaced right now and we’re so unprepared for that. So those with money are under the shade of green.”

Amidst the chaos and anxieties all around us, The Happy Fits are there to provide an outlet and a reminder that we’re all here doing our best to survive the madness. They sing about uncertainty on “Around and Around” – “we keep going around and around, and I think I’m gonna be needing a little stabler ground to hold on,” and remind us that we all have a place here on “Little One” – “we’re just floating in space with the millions like us, dear – you belong.”

With an absolutely electric live show and a message that resonates with so many, The Happy Fits are sure to have a bright future ahead of them. While they’ve already ticked off some bucket list items this trip around the sun, the trio is still dreaming big. When asked what other bands they’d like to play with someday, Ross names The Killers, Bombay Bicycle Club, The Strokes, and The Foo Fighters, while Calvin chimes in that hometown heroes My Chemical Romance would be a dream.